Despite declaring victory over COVID-19 in January, Prime Minister Narendra Modi has been on the receiving end of scathing criticism for holding election rallies that allowed thousands to gather and spread the virus.

The world is watching in horror as the death count soars during India’s deadly second wave of COVID-19. Countless Indians are gasping for breath due to oxygen shortages across the country, but in the face of a colossal government failure to plan for and handle the crisis, it’s everyday Indians who are putting themselves at risk to save lives.

Each day, India is setting world records for the most number of cases, reporting more than 400,000 alone on May 1. And as daily cases climb, experts believe there’s a huge discrepancy between the official count of deaths and the actual number.

The current surge in the cases has brought the country to a state of chaos and fear. Thousands have lost family members, friends and acquaintances. As of May 10, more than 245,000 Indians have died and there are more than 22 million active cases of COVID-19. 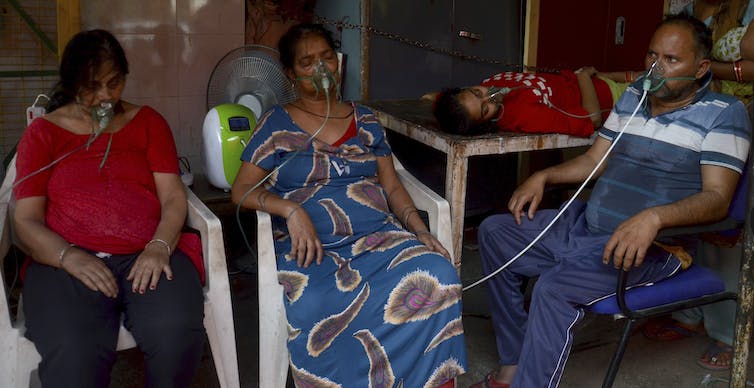 COVID-19 patients receive oxygen outside a Gurdwara, a Sikh house of worship, in Delhi on May 1. (AP Photo/Amit Sharma)

Delhi, the capital city, is experiencing an acute shortage of ICU beds and oxygen. The situation continues to worsen as doctors fear the lack of emergency oxygen supply will lead to more deaths in the weeks ahead.

While big cities like Delhi, Mumbai, Pune and Kolkata are overwhelmed by the rising cases, the situation in small towns is also increasingly grim. Smaller communities are struggling to acquire oxygen and life-saving drugs like remedesivir and tocilizumab.

The lack of available services, including ambulances and other critical medical services and supplies, have forced many to exhaust their financial resources to get their families checked into private city hospitals.

Despite declaring victory over COVID-19 in January, Prime Minister Narendra Modi has been on the receiving end of scathing criticism for holding election rallies that allowed thousands to gather and spread the virus. Almost 9.1 million people gathered in Haridwar in mid-April to participate in Kumbh Mela festivities, the largest gathering of people in the world, after Modi refused to cancel it. 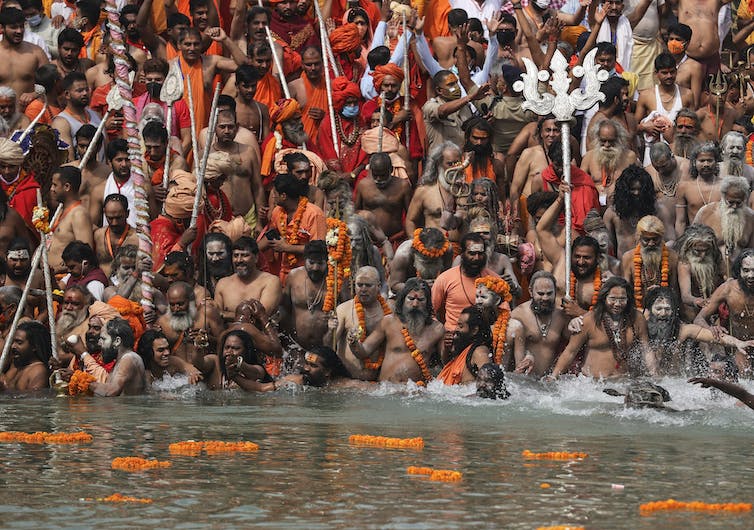 Men take dips in the Ganges River in Haridwar during Kumbh Mela, one of the most sacred pilgrimages in Hinduism, on April 12. Despite clear signs that India was being swamped by another surge of COVID-19, Prime Minister Narendra Modi refused to cancel the festival. AP Photo/Karma Sonam)

Critics have pointed out that the prime minister had a full year to prepare for the second wave, and say the government’s failure to take preventive action in restricting superspreader events has played a major role in the catastrophic second wave.

Modi’s government has also been accused of silencing and harassing critics about his handling of the pandemic. Nonetheless, graphic images of open spaces being turned into mass crematoriums are at odds with the government’s downplaying. 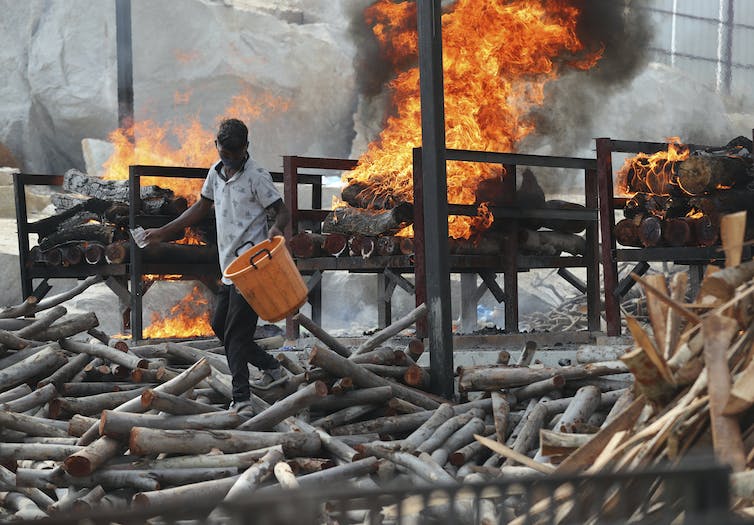 A worker sprinkles fuel on burning funeral pyres of COVID-19 victims at an open crematorium set up on the outskirts of Bengaluru, India, on May 5. (AP Photo/Aijaz Rahi)

In Uttar Pradesh, the police laid criminal charges against a young man for seeking out help on Twitter, requesting an oxygen cylinder for his grandfather.

In the face of the goverment’s intimidation tactics and the lack of a comprehensive plan to save lives and contain the spread, it’s Indian citizens who are on the front lines and taking matters into their own hands to help.

Some have come together to provide verified leads on oxygen supplies, hospital beds and plasma donors. Some are leaving their homes to assist the most vulnerable. Volunteer groups like Citizens’ Aid Collective and Covid Fighters India are working on the ground to save lives.

Volunteers have created Twitter and Whatsapp bots to provide their fellow citizens with information on emergency medical resources. Some Indian women are taking to Instagram to get the word out for those seeking help or needing support, despite receiving rape threats and abusive messages as they work tirelessly to verify leads.

Crematorium workers — most of them marginalized caste — are working round the clock without any personal protective equipment , compromising their health and safety.

The new set of lockdowns declared by state governments will only add to the vulnerability of the working poor, including migrant labourers, since they’re now left without any source of income.

What to do now?

Scientists have criticized Modi’s ruling Bharatiya Janata party (BJP) for ignoring the warnings about the new and more contagious variants of the virus.

Despite early alarm bells, the government failed to make serious policy changes to implement restrictions aimed at containing the spread of the disease. The government has also failed to implement broad relief measures for the working classes and the marginalized communities that are worst hit by the pandemic. 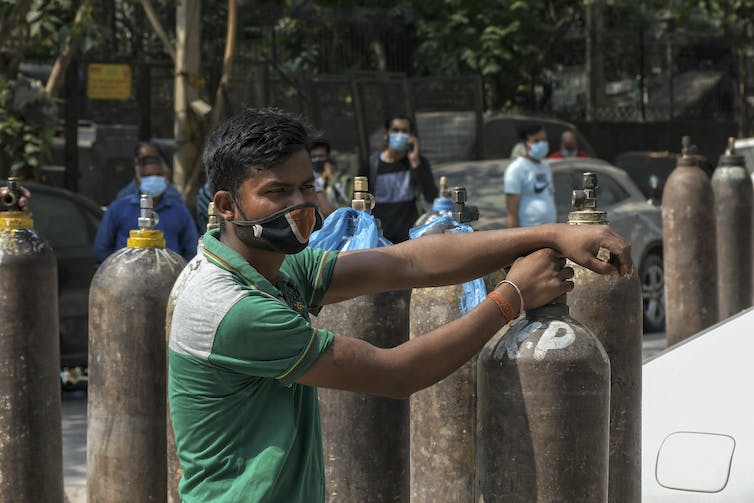 Family members of COVID-19 patients wait in queue to refill their oxygen cylinders in New Delhi, India, on May 3. (AP Photo/ Ishant Chauhan)

While media attention has been focused on the devastating conditions of Indian cities, less is known about the situation in rural India. In addition to being economically marginalized, many rural Indians live in abject poverty, don’t have access to the internet and cannot get information about lifesaving emergency and medical resources.

Adding to the distress, public figures and avid supporters of the BJP, like yoga guru Baba Ramdev and actress Kangagna Ranaut, have made callous remarks. In a viral video, Ramdev stated that COVID-19 victims are responsible for their own condition by not breathing properly, while in an Instagram post, Kangana Ranaut called the pandemic that has claimed millions of lives globally “a small-time flu.” 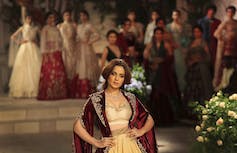 This despite the fact that citizens are seeing daily, graphic images of people trying to save their loved ones, including a woman in Agra giving her husband CPR outside the hospital.

The ongoing disaster raging in India has served to expose even further the appalling, and deadly, class divisions in the country. By leaving the responsibility for fighting the virus to poorly equipped state governments, Modi has put those most at risk in even more danger and forced citizens to mobilize to save lives.

This dual health and humanitarian crisis can only be addressed with a planned vaccination drive and medical assistance for every Indian in every region.