West Bengal is one of the few states that stands against the BJP – and Mamata Banerjee, a woman of real integrity, is a rare political leader.

Mamata Banerjee’s supporters call her Didi, or big sister – and, sometimes, “fire goddess”. Her popularity lies in her power to embody both these things at once. She is a wise and caring everywoman, someone the people of Bengal can imagine as a sister or auntie. And she is a strong, charismatic figure who – unlike most other Indian politicians – has enough fire in her to stand up to Narendra Modi.

Banerjee is an example to all young women in India who dream of a career in politics, and has shown the whole country – as well as her own region of West Bengal – that women can be just as successful as men in leadership roles, and that they have the power to create real social change.

She is also an example to other politicians: she does not hoard wealth, nor does she drive around in a limousine, unlike many of today’s political elite. Instead, she still wears a simple white cotton sari and rubber flip-flops. There is nothing ostentatious about her, and she prefers to lead a simple lifestyle.

In the 2021 elections, Banerjee was elected Chief Minister of West Bengal for a third term, and has now held office for ten years. If you happen to live in the region, she’s a familiar face. Yet in the rest of the country, as a result of the BJP’s control of much of the mainstream media, she receives far less press coverage than she deserves.

Mamata Banerjee in the 1980s 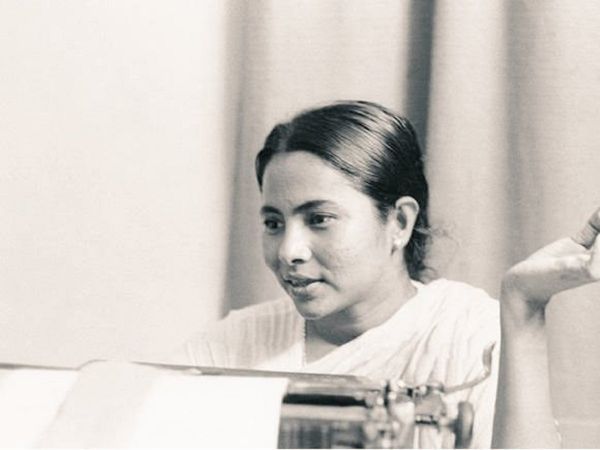 Mamata Banerjee was born in Kolkata in 1955, and was drawn to politics even as a teenager. At the age of 15, when she was studying at Jogamaya Devi College in Kolkata, she became the leader of the student wing of the Congress Party. A few years later she made headlines when, as part of a political protest, she jumped onto the car of a socialist politician to stop it moving forward – and danced.

In 1984 she was elected one of the youngest members of parliament in Indian history, still representing Congress, and became general secretary of the Indian Youth Congress in the same year. Despite losing her seat in 1989 during the backlash against the Congress Party, she was re-elected in 1991 and became Union Minister of State for Youth Affairs and Sports, and for Women and Children’s Development.

Recovery from a violent attack 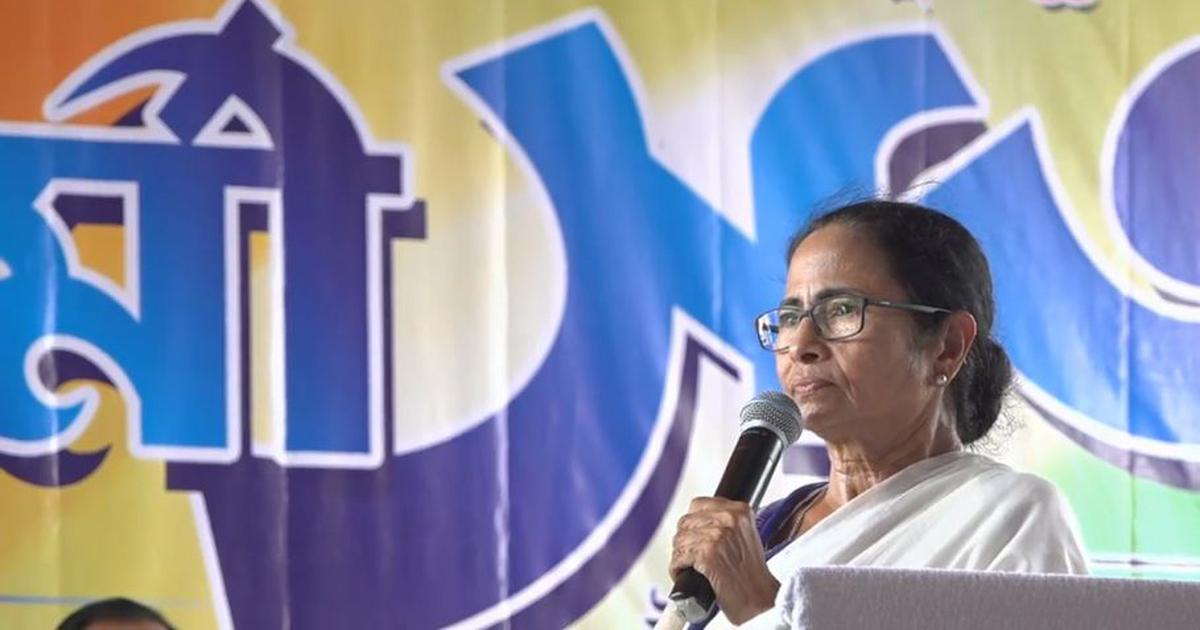 After her appointment as Minister, however, Banerjee’s relationship with the Congress Party began to cool. The government rejected her proposal to improve the situation of sports in India and she resigned in protest, spending the early 90s struggling to create much-needed changes within Congress while strengthening their position against West Bengal’s governing Communist Party.

Always sticking to her principles, she won legions of supporters – and left herself open to attack from enemies. In 1990, at the age of 35, she was the victim of a shocking incident of political violence when a member of the Communist Party attacked her with a blunt weapon, leaving her seriously injured with a fractured skull. The culprit, Lalu Alam, was arrested and charged with attempted murder. Despite clear photographic evidence, however, he was later released on bail, and in 2019 – nearly 30 years after the event – the case was finally closed. Alam was never officially found guilty.

Mamata Banerjee nearly died – but she came back even stronger. And her response to the incident showed her true character. Anyone else might have become fixated on revenge, focusing on bringing the attacker to justice. Yet, for Banerjee, this was never a priority. Her own personal affairs were always secondary to the central issues of politics and social change.

“This reflects her magnanimity, to overlook the guilt of a person who could have taken her life”, said one of her colleagues.

The All India Trinamool Congress

In West Bengal, images of Mamata Banerjee are everywhere 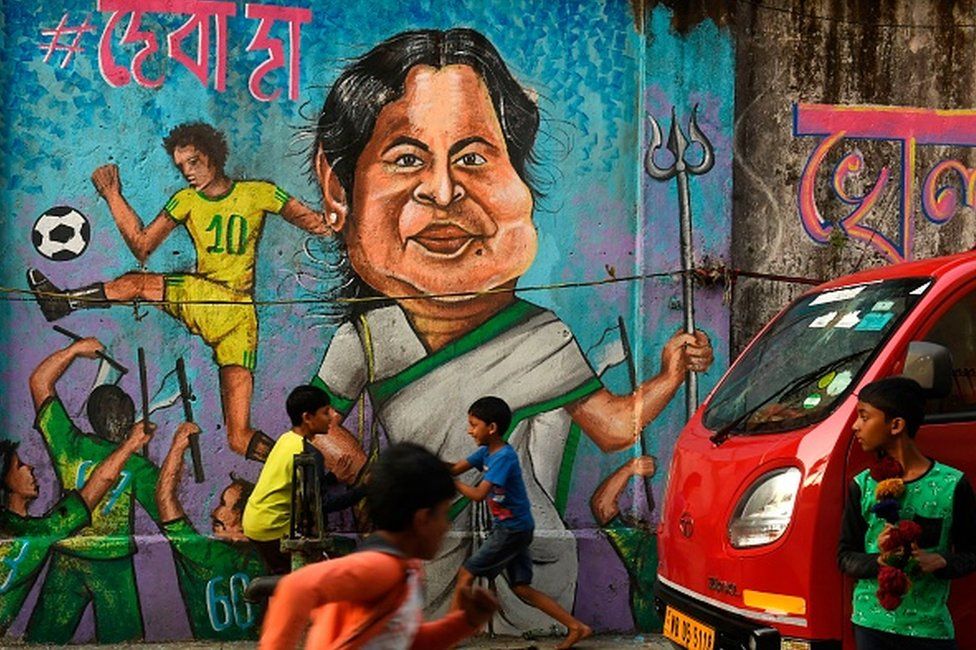 In 1997, after Banerjee had been a Congress member for 26 years, it became clear that she would never be able to reconcile her views with theirs. She left to found her own political party: the All India Trinamool Congress (AITC). The AITC quickly replaced Congress as the main opponent to the Communist state government, championing the rights of West Bengal’s farmers and Muslim minority – almost a third of the population – in addition to advocating for greater development in the state.

Most politicians gradually lose popularity the longer they remain in power, as they fail to deliver on their early promises. Not Mamata Banerjee. She has retained huge popular appeal, both for the welfare schemes she has implemented – such as support for students with cash grants and bicycles, financial incentives for girls to continue their education, and affordable health insurance – and also as a result of her own personal image.

Banerjee has a particularly strong appeal to women voters – and not only by virtue of being a female politician. She has made it a priority to actively support women, encouraging families to educate their daughters and, most recently, providing a monthly basic income for women who are the heads of their households. She has also made it clear that Muslims are equal citizens of West Bengal, declaring Urdu the second language in Muslim-majority areas and ensuring that scholarships are available to Muslim students. This inclusivity is in clear contrast to the BJP’s promotion of a Hindutva ideology and the subsequent rise in anti-Muslim prejudice.

Crucially, Mamata Banerjee has succeeded in keeping the fine balance between encouraging business and development while also protecting the rights of the marginalised. In one of the most well-known examples, in Tata Motors – a car company headed by the wealthy Ratan Tata – acquired land to build a factory in West Bengal. As a result, thousands of farmers were displaced. Mamata Banerjee was opposition leader at the time and took up their cause, rallying protests, calling a state-wide bandh, and even going on a 25-day hunger strike. Eventually, she won. Years after the land was illegally taken from local farmers, it was finally returned to them in 2016.

While business and industry have thrived in West Bengal under her leadership, she has always upheld the rights of farmers rather than simply bowing to big money.

Today, West Bengal is one of the major states to hold out against the dominance of the BJP. Mamata Banerjee has long been a thorn in Modi’s side, and in the 2021 elections he spared no expense in his attempt to win the election battle – even in the face of a pandemic – as he implored voters to give the BJP a chance.

Both Modi and home minister Amit Shah held rallies in West Bengal in March and April this year in the run-up to the elections, encouraging large crowds to gather in support – many of them paid to be there by the BJP – despite the obvious danger of mass gatherings during the COVID-19 crisis.

This may well have contributed to the wave of COVID cases in Kolkata, but it failed to swing the election. Instead, Mamata Banerjee’s appeal to West Bengal’s culture of inclusivity won the majority vote, as she made it clear that Modi and Shah have no real understanding of the region.

Bengal, alongside Kerala and Tamil Nadu, is one of the key states that can stand up to the BJP. Now, as Modi’s popularity plumets after his disastrous handling of the COVID-19 pandemic, state leaders such as Mamata Banerjee offer an alternative for India. At times like this, we need a someone who can be both a big sister and a fire goddess.