These were selective narratives from a particularly male perspective and presented colonisers as transforming social benefactors installed to provide a civilising influence.

Sayan Dey, University of the Witwatersrand

When I was a child growing up in Kolkata, I would hear stories about the European colonisation of Bengal – the precolonial name of India’s West Bengal. These were selective narratives from a particularly male perspective, and presented colonisers as transforming social benefactors installed to provide a civilising influence. The rich histories of Indian philosophy that were once associated with religion, education and health were replaced by the colonial philosophy of conversion, modernising and improvement.

But it was not just European men; women too played a pivotal role in normalising colonisation in Bengal in the 19th century. The wives and daughters of merchants, engineers, ministers, doctors and architects came to India and not only supported their husbands and families, but took on what they saw as humanitarian roles where they felt they could be useful in the community.

But you wouldn’t know this from reading any European colonial histories of Bengal, because the stories of these women have largely been ignored. The majority of existing narratives about the Scottish influence on the colonisation of Bengal reduces women to just “partners”, or those who came to India “because they wanted to find husbands”.

My research rediscovers the stories of such women interred at the Scottish Cemetery in Kolkata, the West Bengal city that was once the administrative HQ of British India (previously called Calcutta). I wanted to highlight and explore these forgotten social histories through a “hauntological” perspective. Rather like a ghost, these unearthed stories were a returning of the past to “haunt” the present.

By uncovering the complicating histories of colonial women, I wanted to highlight the challenges of the decolonial gaze, which seeks to counter traditional historical narratives created by colonisers. In other words, the untold stories of the Scottish women in Calcutta revealed in my documentary (below), returned to the present to disrupt the accepted interpretations of European colonial history in West Bengal. This now invites people to engage with a different and overlooked perspective of the period.

While their husbands were building, buying, managing and administrating British India, wives and daughters were working in hospitals, teaching in schools and helping to provide community services. But their efforts and contributions went unacknowledged in the historical unfolding of empire.

The gravestone of Jane Elliott who looked after homeless children in Calcutta. Author provided 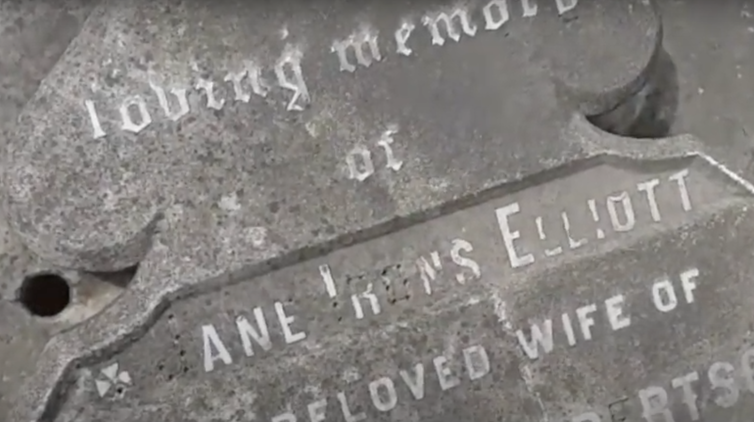 In 2019, I collaborated with academics from Bridgewater State University in the US in making my documentary to unpack these issues. The documentary argues that the physical death and decay of the human body does not necessarily erase the social and historical narratives that have shaped a person’s existence.

Through their discovery and circulation, the cemetery stories of the Scottish women endure beyond graveyards that decline with time, and now exist in the present and the future. The women’s stories make an effort to “honour and resurrect the future inside the past” because they have laid bare another dimension to European colonisation that previous interpretations had overlooked.

The documentary engages with the narratives of 11 Scottish women, selected from the available list of names in the cemetery records. Initially, 24 women were identified for documentation, but less than half could be used as the carvings on so many of the gravestones were too faded or degraded to use. The film shows that these stories have not come from existing written or oral accounts. Instead, these tales of real and often difficult lives have been resurrected from the information chiselled onto gravestones.

Here we find stories of Scotswomen like Jane Elliott, who worked as a missionary and looked after homeless children in Calcutta; or Christina Rodger Wighton who worked with people suffering from cholera, malaria and dysentery and died herself of cholera aged just 27; or Caroline Leach who arrived in India in 1850 just as epidemics broke out and worked as an apothecary in a leper colony; or Anne Baynes Evans who worked with the poor through the Baptist Missionary Society and was committed to educating young Indian women. Apart from their gravestones and cemetery records, no account of these women’s lives and achievements exist.

Many other colonial women’s lives in India follow the same pattern. Here were Scotswomen who saw their role as benevolent colonisers, contributing towards the “growth” and “development” of Calcutta by establishing schools for girls, health centres, nature parks and places of worship. But the ultimate goal of their high-minded and no doubt well-meaning contributions was to justify why colonisation was necessary.

But these women played an important role as doctors, teachers, apothecaries, nurses, missionaries and even piano tuners. The gravestone stories reveal the various ways Scottish women independently played an active role towards shaping the European colonial administration in Bengal, and particularly in Calcutta.

But their stories have remained mostly undiscussed due to lack of documentation – their lives not seen as even deserving a note for posterity. The stories that remain on their gravestones function as what anthropologist Fiona Murphy calls “unpacified ghosts”. Their stories call out to be heard, and to challenge the practice of “conditional inclusion” which preserves historical colonial power structures, by unearthing untold stories of women’s lives and contributions.

This research not only makes an effort to document the historical narratives of these Scottish women, but also illustrates how cemetery gravestones literally remind us of the past, revealing stories that show once again how history is so often written from a singular – and male – perspective. But now the lives of these woman have at last been illuminated. Even in their silence, the dead have a story to tell.